The Foundation’s seagrass restoration trial at Snowden’s has had a couple of setbacks, with repair work needed.

Foundation volunteers first translocated 21 seagrass cores on 26th October 2018 and over the next few months the number of surviving cores decreased, and then there were none.

Another 21 cores were translocated on 26th March 2019, and now there’s no obvious sign of them.

In the last couple of weeks a few of our bags, for unknown reasons, have been reoriented onsite and six have been moved away from their locations and taken in closer to the shoreline.  This of course means that the protection provided by the bags, for the seagrass, is gone.

It looks like, when the bags were moved, the marine rope holding them to their posts shredded and so better quality rope will be purchased for this and further trials.

At the same time, though possibly coincidentally, someone used a black marker pen on one of our signs. That was readily fixed with some methylated spirits.

Until mid-September 2019 there are few low tides (around 0.3m) in the daytime and so any further attempts to translocate more seagrass cores will need to wait for those favourable conditions.

In the meantime, we’ve returned the bags to their sites and will rope them together. It’s been heartening to see a large blue swimmer crab, and lots of fish, around the intact bags.

A large ship going out along the River provided a stark demonstration of the force of the waves on the bags and the seagrass. 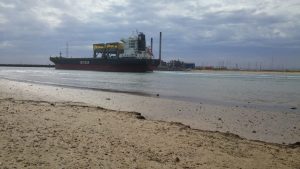 Several cores of seagrass, behind the protection of bagged shell, and joining resident razorfish (pinna)